Women must be prepared with education, skills to earn their right 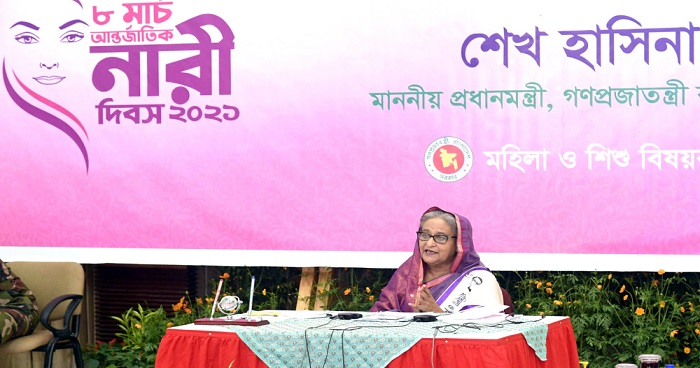 Women should arm themselves with the right education and skills to earn their rights in society, Sheikh Hasina has said.

The prime minister was speaking at an event to mark International Women's Day via videoconference from Ganabhaban on Monday.

“Let me tell you something: You can’t get your rights only by saying 'give women their rights.' Rather, you have to earn it. You must become eligible to do so. That can be done only through education and skills training,” she said.

Sheikh Hasina highlighted the different measures taken by Bangabandhu Sheikh Mujibur Rahman as well as her government to ensure that the women are empowered.

Now, women are getting scholarships until their higher education, the prime minister said, adding 70 percent of the stipend from the Prime Minister's Education Assistance Fund are given to women. Also, girls comprise the majority of the 20 million students receiving government scholarship.

“If we want to build a great society, we must provide education to all, irrespective of their gender.

“We ensured that both men and women have access to training courses. This will ensure that women can prove their capacity and find work.”

The Awami League is committed to ensuring women’s participation in all spheres of life, according to Sheikh Hasina.

She pointed out that no woman would be appointed to the posts of the deputy commissioner, superintendent of police or Upazila Nirbahi Officer before her party's rule in 1996.

Women's representation in parliament is the ‘biggest achievement’ of Bangladesh, with the current speaker, leader of the house and leader of the opposition, all being women, Sheikh Hasina said.

A society becomes crippled if half of its constituents is not working, according to the Awami League chief.

“Earlier, women were confined to the four walls of their homes in the name of religion or society. They have overcome those obstacles now and are moving forward,” she said.

The government honoured five women with the ‘Shrestha Joyeeta’ award on the occasion of International Women’s Day. State Minister for Women and Children Fazilatunnesa Indira handed over the awards to them on behalf of the prime minister.

She also described how Bangabandhu’s wife Begum Fazilatunnesa supported him in his struggle to ensure the rights of Bangalees, and provided courage.

“She never had any demand as a wife. On the contrary, my mother took all responsibilities of managing the family,” she said.

“She reared us and looked after the party issues of the Bangladesh Awami League and Chhatra League when Bangabandhu Sheikh Mujib used to be in jail. But she did all of these from behind the scene as she never wanted to be in the limelight. My mother Begum Fazilatunnesa made a huge contribution to our independence struggle. Many a time, she made decisions that propelled our achievement of independence. The Father of the Nation used to respect her a lot,” the prime minister said.

How Bangladesh has arrived on the global map at 50

Women must be prepared with education, skills to earn their right