Civic amenities to be available at doorstep: Taposh 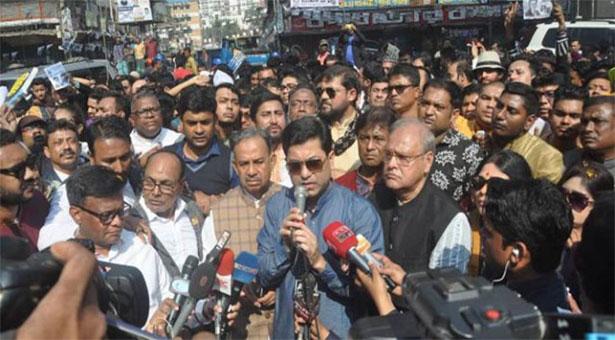 Awami League mayoral candidate for the Dhaka South City Corporation (DSCC) election Barrister Sheikh Fazle Noor Taposh on Monday said he will make sure that all civic services are delivered at people’s doorsteps if he is elected in the polls.

"There's no doubt that people have accepted our outline of development. If we get elected, we’ll deliver all the civic amenities at their doorsteps within 90 days," he said while carrying out electioneering in Demra area, reports UNB.

Pledging to take necessary measures to create a modern and vibrant Dhaka, the AL mayoral runner said newly-connected wards of DSCC will be provided with all the modern amenities. "We’ll start working setting a priority to build a well-governed, modern Dhaka."

He alleged that BNP is hatching conspiracies to make the election environment unstable.

He further alleged that BNP activists are attacking themselves and blaming opponent candidates.

The AL candidate said people will give a befitting reply to ‘terrorist activities’ of BNP candidates through ballots on February 1.